Crowdfunding for Nonprofits - An Essential Guide to Improving Your Fundraising Efforts

Chris Charlesworth, CEO and co-founder of HiveWire, joined us for June’s Toronto Net Tuesday event to share his expertise on nonprofit crowdfunding initiatives and provide insight on HiveWire’s latest work, the Crowdfunding Guide for Nonprofits and Charities. If you weren’t able to attend this session of Toronto Net Tuesday or just wanted to better understand crowdfunding, this blog post summarizes the key takeaways from the event. You can also watch the event recording on TechSoup Canada’s YouTube channel here and check out Chris’ slides on SlideShare here.

Crowdfunding is essentially what it sounds like - it’s the process of funding a project or venture by raising small amounts of money (funds)  from a large number of people (crowds), usually with the aid of the Internet. The main thing to takeaway is that crowdfunding is an essential tool for online fundraising.

Crowdfunding really is a meritocracy and a tool that can be used and taken advantage of by any organization of any size. - Chris Charlesworth

After interfacing with a number of organizations, holding workshops, executing surveys and working tirelessly, Chris and his team at Hivewire released the crowdfunding guide, using information from a database of over half a million crowdfunding campaigns. The guide, Crowdfunding Guide for Nonprofits and Charities, outlines a number of steps to help you execute an out-of-the-park campaign.

Step 1: The Basics of Crowdfunding 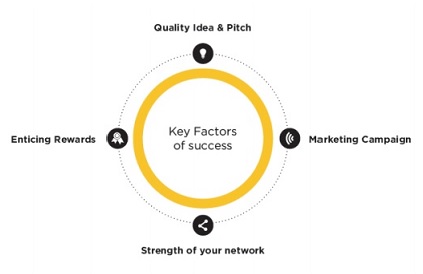 Now of these two crowdfunding methods, which do you think is more successful? If you guessed rewards-based crowdfunding, then you are correct! According to Hivewire’s research, the number of contributions for rewards-based crowdfunding is considerably higher. That’s not to say a donations-based campaign cannot be successful, but it does reveal that people are more likely to contribute to a campaign when they find value in what they are getting back, which brings us to the next step.

Step 2: Building Your Campaign
This is the step where you have the opportunity to add the wow factor to your campaign. You can make your campaign stand out by better understanding why others contribute to your campaign and appealing to the needs of your target audience. Think of this as customer segmentation - separate individuals into groups, identify their shared values and incorporate these into the campaign. 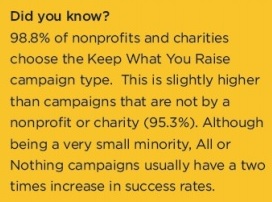 In his presentation, Chris covered the top reasons people invest in a campaign:

Once you’ve outlined specific value drivers that appeal to your supporters, you can decide on what rewards to offer. Remember, when selecting rewards for your campaign, you need to ask the question: “how much value am I creating for the people who are investing?”

With so many rewards options , from giving recognition (ex. via a tweet), to providing VIP/backstage access to your event or facilities, to offering a different experience individuals would not otherwise have access to, you need to provide value that appeals to your supporters. Chris explained there’s a 22% increase in the success rate of rewards-based campaigns that offer valuable experiences.

Just remember, there’s a full spectrum of rewards but the only thing that matters is the perception of value that is created for the contributor. - Chris Charlesworth

Once you’ve laid out the main areas of your campaign, it’s time to test it out. Chris heavily emphasized the importance of this step because it has a strong correlation  to the success 0f your crowdfunding campaign and how often testing is overlooked.

Chris explained that you can go through the iterative testing process by testing with mini focus groups for feedback and/or testing concepts live on the web to see what traction and interest you receive. Strive to optimize your campaign by testing on your particular target audience. Chris went on to explain that testing can make the difference between a middling campaign and an extremely profitable campaign.

Step 3: Marketing Your Campaign
After you’ve tested out your campaign and made the necessary tweaks and adjustments, you can begin your marketing initiatives. This step involves significant planning and preparation, so be sure you budget enough  time to get organized. You also need to build your network of supporters in advance then prepare your networks for the campaign.

This is also the stage where you establish a communications plan. Chris explained that this helps to coordinate your messaging for the campaign. You also want to optimize your marketing by conducting  market segmentation, and managing social media and customer service. At this point you might even want to conduct another round of testing. Once you’ve finished prepping and feel comfortable with your campaign, it’s time to execute!

Step 4: Executing Your Campaign
Chris explained that there are five daily steps to remember during the execution stage of your campaign. Use the checklist below to ensure you revisit these steps on a daily basis:

Step 5: Post-Campaign
You’ve done it! You successfully planned and executed your campaign, but now what? Often times, people think all the work is done at this point, but what they don’t realize is post-campaign activities are just as important to the previous crowdfunding campaign phases/steps.

In his presentation, Chris outlined four important post-campaign activities. First off was reward fulfillment, that is, if you offered rewards to donors in your campaign you should make sure they are sent to recipients as soon as possible. Factors to keep in mind are shipping costs, delivery timelines and timely status updates from you to your contributors.

Also, after the campaign you need to follow-up and communicate appropriate thank you messages. From donors to campaign backers to supporters and volunteers, it’s important to recognize each of their services and efforts. When thanking donors for their support, be sure to share news about the success of the campaign. If there was a hiccup in your campaign and you did not meet your goals or if there were some unforeseen changes, be honest and enlist the crowd to help you solve the issue. It’s important to manage expectations by being transparent with your supporters, to earn their continued trust and loyalty.

Finally, you should nurture new relationships. New individuals who supported your campaign are an opportunity to create meaningful and lasting connections. Chris explained that these supporters could help you out in the future as backers, partners, clients, volunteers, sponsors, etc.

On behalf of Chris, his team at HiveWire, and our team at TechSoup Canada, we hope that we helped to further your knowledge on crowdfunding and to develop key strategies for your crowdfunding campaign.

Crowdfunding is a safe space for people to try new things for initiatives that wouldn’t otherwise get participation or funding. - Chris Charlesworth