How to Engage your Community with a Good Story

The following blog post recaps a NetSquared Toronto presentation by Stefan Hostetter. Stefan is the ED of the Green Society Campaign and works side-by-side with Green Majority Media in an ongoing effort to support Toronto’s environmental community. You can watch his full presentation here.

Storytelling is an important part of any nonprofit's work, whether they’re telling an impact story about the people they serve, or a story about the organization itself. Regardless, nonprofits have to tell stories to strengthen their brands, draw in donors, and raise awareness around their mission. Stefan Hostetter spoke at our NetSquared Toronto event to explain how nonprofits can do just that: engage their communities with a good story.

The Two Types of Storytelling

Stefan explained how storytelling can come in two forms: traditional and corporate.

Corporate storytelling: Storytelling that tries to sell a product, idea, or ethos by crafting stories that make you identify with a brand. For example, a commercial for Nike shoes that shows footage of people running is trying to convince you that if you like running, you like Nike.

The Advantage of the Nonprofit Storyteller

Storytelling plays a unique role in the nonprofit world, because nonprofits have one distinct advantage over most for-profit organizations.

“People want to like nonprofits. They want to identify with your brand. You’re doing good things,” Stefan said, adding jokingly, “If you’re a nonprofit that’s doing things people don’t want to support, I don’t fully understand how you’re a nonprofit.”

The problem is that most nonprofits get so caught up in functioning like a business, they lose sight of that inherent advantage.

For example, if a nonprofit produces a glossy, high-quality promotional video in a similar style to a Nike commercial, they’re going to come off as Nike - which may turn potential supporters off. This is because corporate storytelling actually accomplishes the opposite of what nonprofits want to accomplish.

“Corporate storytelling wants to put an emotion in someone else, and have them feel it towards you. As a nonprofit, you take an emotion and put it out there; and if people absorb it, great. If they don’t, you were probably never going to get them anyways.”

You might be thinking right now: ‘But what about potential supporters who would support my nonprofit if I did try to convince them?”

Forget about them. It may seem counter-intuitive, but they’re not your audience. If they don’t want to support your nonprofit after hearing a story about the good work you do, no amount of corporate storytelling is going to change that.

A good story starts with a feeling. It can be humourous, sad, positive; just something that drives your nonprofit’s work. For example, maybe you were fed up with the corporate world and that’s why you work at a nonprofit? That’s compelling. Nonprofit’s need to personalize their stories by painting their staff, clients and their entire organization as people.

When Stefan had the opportunity to manage CSI’s facebook account, he wanted to communicate about what other CSI members were doing outside of work - in other words, he wanted to tell their personal stories. It was simple, touching and had a clear formula: here’s someone who works at CSI, and here’s something they did. It’s the very opposite of corporate storytelling; it conveyed each person’s passion for helping others and that’s why it was effective. 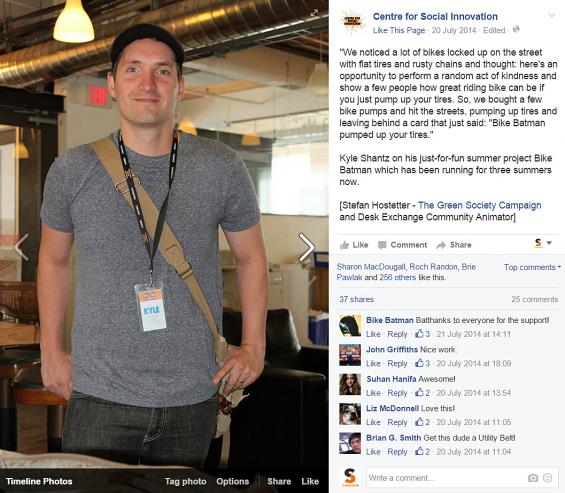 Regardless of what you write about or how you convey it, remember: if your piece matters to you, others will feel it.

Write Through the Hardest Parts

Writing to convey an emotion can lead you to write about difficult topics - so much so that you may start feeling anxious and want to skip over them to something more appealing. This is a trap; don’t skip over these parts! This is a sign that these are the areas you should focus on because they are where you will unlock the heart and feeling of your story.

You should be honest with your story. If you’re writing a story you’re actually sad about, making it funny just doesn’t work - the audience will see right through you and feel disconnected. In fact, it’s best to be brutally honest with your writing - at least for your first draft.

“When you’re writing by yourself, nobody else is going to see it. And then you can edit out parts you don’t feel you should say,” Stefan said. “But if you don’t get to honesty first, you're never going to tell a compelling story and you’re going to have a much harder time getting people to pay attention to what you have to say.”

Every story needs a frame: a physical setting or conceptual understanding of the circumstances under which a story is taking place. For example, Harry Potter’s frame is an elaborate wizarding world that exists hidden within a non-magical world, and within which good and evil wizards struggle for power. But the emotion doesn’t come from the frame; rather the frame seeks to ground the reader's understanding of the events that occur within a story.

No one is unhappy with a short story. In fact, it’s good to leave your audience wanting more!

So don’t get too attached to certain lines or paragraphs, and recognize when something doesn’t add to the story - and then cut it. Cutting is part of the art of writing.

Stories never have an ending because life continues happening! You don’t have to arrive at a definitive conclusion to end a story, and it’s ok to leave off at a part that could lead somewhere else.

An easy trick to end a story is to hint at something at the beginning of a story (introducing a theme etc.) and then revisit it at the end. This is called “Hide the ending”. When you end the story by touching on a theme introduced at the beginning, the audience will accept it and recognize it as an ending.

Don’t get carried away though! If you “hide an ending”, but then do not end the story, you may unintentionally create what Stefan calls "The Lord of the Rings Effect”. This is where the audience is lead to believe the story has ended, however the story somehow continues. After being mislead few times, the audience may grow tired of the story and lose interest.

We hope these tips help your communications writing. Good luck telling your stories!