Choosing Between a Laptop and a Tablet

This post originally appeared on techsoup.org's blog and was written by Kevin Lo, Lead Technology Analyst. Keep in mind that prices may be in USD. 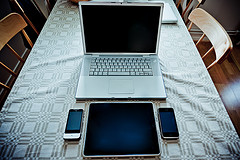 Tablet computers - lightweight connected devices that use an on-screen keyboard for data input whose form factor is mainly comprised of a screen - are certainly mainstream in the consumer devices category. Apple recently released its iPad 2, which boasts front- and back-facing cameras and is more lightweight than its predecessor. Other companies like Research in Motion and Samsung also make tablet devices based on a similar concept but with a different operating system than Apple's. Walt Mossberg, tech journalist for the Wall Street Journal, recently updated his semi-annual buyer's guide to laptops and mentioned the following in terms of choosing between the two form factors:

Tablets tend to beat small, low-cost laptops in weight, start-up speed and battery life. And they are competitive for lots of common tasks, such as Web browsing, email, social networking, and viewing or playing documents, photos, videos and music..but laptops still win for intensive work like creating long documents, or doing anything that requires precision and benefits from a physical keyboard. They also are more compatible with printers and external disks.

If you are in the market for a new laptop, Mossberg's is a good guide on what you should be looking for and what you can expect to pay for certain features. As with any IT investment, nonprofits need to consider the intended uses of the device, whether it be donor management, event tracking, or volunteering, and see how the devices operate for those functions. Laptop manufacturers like Lenovo and Dell also offer "tablet PCs" that have a full-sized keyboard for data input as well as being touchscreen-enabled. For a video supplement to the guide, check out this video.