What is Open Source? Part 3: Linux

In part one I looked at what open source software is (in summary, software that you can if wish modify and customize to your needs and is normally free). In part two I looked at three non-profit organizations that are already using open source software at the heart of their organizations (FreeGeek Toronto, Planet Geek and the Toronto Free-Net). Now in part three I will look at Linux, in essence a full replacement for Microsoft Windows. 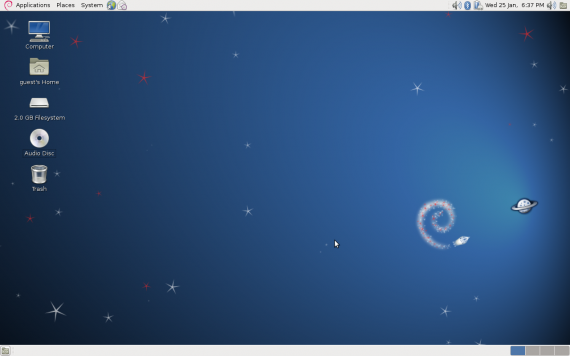 If you decide to replace Microsoft Windows with Linux you will face the question “Which Linux?” If you were thinking about Linux as a desktop system doing what might otherwise be done by Windows XP/Vista/7, you would need a collection of programs: the Linux kernel (the core program), a desktop program (like Gnome - see the image on the left) and in most cases you also want an office program (such Open Office) and a web browser (such as Firefox). If you were setting up a server, doing the work that might be done by Windows Server 2003/2008, you would want the Linux kernel, plus such programs as a mail server (such as Postfix) and/or a web page server (such as Apache). For both servers and for desktop machines, you will need hundreds of support programs, the little grunt work programs that let you copy files, or change the clock time, or set-up your internet connection. The little support programs are important, but should normally be invisible.

You could, if you really want to, go out and collect all the hundreds of programs you need for a complete system, building your own Linux system from scratch. But building a Linux system from scratch is a massive amount of work to start with, which would be followed by having to make periodic checks to see the software had been updated and installing those updates. Fortunately, there are hundreds of companies and groups that have assembled complete systems, made installing those systems straight forward, and make installing updates as they become available easy / straightforward. Granted, of the hundreds of groups / companies who do that sort of packaging and support type job, many do so for odd/unusual hardware, for specific languages or for very specific jobs. Also, different groups that gather these programs together answer questions like “How should updates be handled?”, “What software should be included by default?” and “Where should some files go?” in slightly different ways.

I'll touch on four of the most popular Linux systems, that all non-profits should at least be aware of:

Debian is run by a non-profit that want this to be the universal Linux. So, the focus seems more or less equally split between being a server and being on people's desktop. Further, Debian supports a wider range of hardware than any of the other Linux systems noted here. So, if you are desperate to squeeze an extra year or two of life out of a very old Macintosh, Debian may be just what you want. There is a basic range of support services available from Debian for free, though donations are welcome. For any custom modifications you will need to turn to people and firms unaffiliated with Debian. For reasons such as it's ability to be both a good server operating system and a good desktop, plus being supported by a non-profit, this is what the Toronto Free-Net uses as their first choice in Linux systems.

Ubuntu is a derivative of Debian and can be thought of as Debian with the option of commercial support via a company called Canonical. A basic range of Ubuntu support options, such as the always important software updates, are available for free (funded via Canonical). Ubuntu has focused more on the desktop than the other systems noted, so the Ubuntu desktop is a little more polished, and a little easier to get running. Ubuntu can be used for setting up severs, but that is not Ubuntu's strength or focus. A feature of Ubuntu CDs is that you can run them as “live” CD, where you can run Ubuntu from the CD - allowing you to try Ubuntu without installing anything on to the hard drive. The desktop focus has make Ubuntu the system of choice for both FreeGeek Toronto and for Planet Geek.

Red Hat has become the open source world's first billion-dollar-a-year company by selling support services for free software. Red Hat Linux is focused on servers, the sort of computers that serve up web pages and handle massive numbers of e-mails. Further, Red Hat tends to do a better job of supporting features that are in demand within large computer centres, things like system virtualization (where one real computer is made to act like several computers), and cloud computing services (where one program can be shifted between several computers). Red Hat doesn't really focus on the desktop. Any sort of support services, including software updates, from Red Hat do cost money. For the vast majority of non-profits Red Hat Linux would be a poor fit, but Red Hat is too big a player in the field to be ignored.

CentOS is in effect a knock-off of Red Hat, exactly mimicking everything Red Hat does, and the way Red Hat does things. A basic range of support services, such as software updates, are available from CentOS for free. CentOS is a non-profit and while donations are welcome, they are not required. The big advantage with CentOS is you get what is for all practical purposes is a Red Hat system for people already familiar with Red Hat, without any of the Red Hat support costs. Red Hat and CentOS can be used for setting up desktop machines, but that is not their strength.

So, which Linux is best? The answer is it depends. If money is not a big issue for your organization and your focus is just setting up large numbers of servers in a complex arrangement, Red Hat is worth serious consideration. If money is very tight and your only concern is large numbers of servers, or you have several experienced Red Hat volunteers, have a look at CentOS. For most non-profits I would recommend Debian or Ubuntu. Debian is good if you're looking at a number of servers and a few desktops or if you are supporting very old/exotic computers. Ubuntu would likely be a better choice if your focus is lots of desktop systems and very few (or no) servers. Also, of course, some organizations have found it best to run more than one Linux, such as CentOS on the servers and Ubuntu on the desktops.

While there are some differences between the four popular Linux systems noted above, they are not that big. Anyone very familiar with any one of these systems should be able to transition to any of the others fairly to very quickly.

Beyond the above Linux systems, there are hundreds of other options, some of which are worth considering in specialized cases. An example of the specialized Linux systems out there is Tomato Linux which is designed to run small routers, the devices that tie different parts of the Internet together. Tomato Linux is brilliant at running small routers, and it is unapologetically awful at doing anything other than running small routers. The big strength of the likes of Tomato Linux is that it adds features/options that were not included with the original software that came with the router, all at no charge.

There is Linux support out there. In addition to the paid support options from firms like Red Hat and Canonical, there are online forums and mailing lists for most Linux systems. Further, there are also forums for many of the complex/advanced open source software programs. There are also Linux-oriented magazines and local Linux user groups. A quick search on Google or one of the other search engines will turn up a Linux user group in most major Canadian cities. Visits to most large newsstands will turn up various Linux-oriented
magazines.

One previously not noted advantage of Linux over Microsoft Windows is in the area of computer viruses. It is possible to write malicious virus software for Linux, but it is harder to do than with Windows. Also, many virus authors do so with hopes of making money. To that end they tend to focus on largest market, Windows, while leaving smaller markets, such as Macintosh and Linux, alone. For these reasons Linux users tend to see virus as an easily dealt with oddity, and not the hassle that many Windows users find them to be.