This blog post was originally written by Jim Lynch, writer at TechSoup. Jason Shim, recipient of this year's NTEN award, is a good friend of ours and we are thrilled to see TechSoup feature him in an interview. We're so proud of you, Jason! Way to represent the Canadian nptech scene :)

After Jason Shim won the 2014 NTEN Award in March, I thought I’d have a look to see why Amy Sample Ward and company thought so highly of him. He is the first Canadian to win the award, and it turns out he's a pretty great choice.

First, Jason Shim is not a famous guy. He doesn’t run an organization; He's the digital media manager at Pathways to Education in Toronto. Of course he does great work leading the organization's national digital strategy, and they have plenty of work to do. Pathways to Education is dealing with the large and troubling Canadian high school drop out problem. They provide a comprehensive set of academic, financial and social supports to youth, and they must reach young people. That’s what Jason does — he reaches people.

One thing I’ve noticed about the NTEN award winners is their restless knowledge sharing in an array of subjects all over the place – not just in their own organizations. Jason Shim is classic in this regard.

When I asked Jason why he is interested in so many different NPTech things, he said it’s probably because he spent his formative years in Kitchener-Waterloo in Southwest Ontario where he went to Wilfrid Laurier University. He said: “It’s a unique place where it’s easy to marshal NPTech resources like on my txtocracy project. It’s kind of a northern Silicon Valley. There’s a great startup scene there.”

For Jason, his motivation for the work is largely personal, though. He explains:

“I think one of the most rewarding moments came after a recent talk that I did about using technology to connect people together and I had a great grandmother approach me, held my hands and hers and declared that she was going to take the plunge and join Facebook so that she could tell her great-grandkids that she loves them, because it was often challenging to reach them on the phone. Those kind of moments really make me feel good about the work that I do and being able to share the knowledge to make technology more accessible to everyone.

One For The Canadians 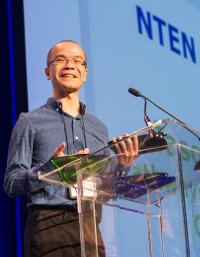 My next question was about being the first NTEN Award winner in Canada. Here’s what he said:

“There’s really great work going in Canada. Sometimes we even get things first like the Google Partners Program for Google adwords. However in the NPTech world, I often forget I’m Canadian. Sorry to be typically Canadian and noncontroversial on this. One thing I can say is that Canada is a smaller nonprofit market and because so many charitable processes and administrative things are geared to American 501(c)3s, it is sometimes more difficult for us.”

Where Jason Gets His NPTech Information

Here's where Jason learns about the latest trends and news in technology:

“When I think about it though, while I like to read about digital strategy and social media, I actually spend a lot more time reading about things that are not related to nonprofit tech. I think that reading about unrelated topics can be really beneficial because it helps you to identify some interesting perspectives on the world and from there, you can pull it back into the nonprofit sector to further strengthen it.”

Here are the people who inspire and motivate Shim:

I found out in talking to Jason is that he didn’t know that he was getting the 2014 NTEN Award until they called his name at NTC. Jason said simply: "It was a total surprise and I was very deeply honoured and humbled. It was such an emotional moment. Some of the people who previously got the award came to me and welcomed me to the club."

Do you have an NPTech unsung hero you’d like to name? Please log in and tell us.

Jim Lynch is a TechSoup staff writer and has long specialized in electronics reuse, recycling, and green technologies of all sorts.