In part one I looked at what open source software is (in summary, software that you can if wish modify and customize to your needs and is normally free).

Now, let's look at some technologically oriented non-profits and charities that are using open source software as a major part or for all of their daily operations. Admittedly these cases are not typical in the non-profit world, but they do show off what can be done with open source software.

The Toronto Free-Net offers a range of free and low-cost Internet access options to the people of southern Ontario. For the Toronto Free-Net, Linux was being used as part of a test program before they opened to the general public in 1994. With over 50,000 members, all of the Toronto Free-Net's current servers and all but one of the office desktop computer are built around Linux.

An ongoing concern at the Toronto Free-Net used to be the staff overhead of tracking software licenses and the costs in time and dollars of those licenses. By switching to open source these issues, along with the possible public relations problems that could have come from mistakes in handling licenses, are now a thing of the past.

Toronto Free-Net President Iain Calder noted about the way things used to be: “planning for upgrades and for expansions was much more involved, as it had to include budgeting and haggling with vendors. As a non-profit, we would also spend time to explore and negotiate, with the vendor, the possibility of receiving a sponsored software license (i.e. a donation) from the vendor. This too, consumed time.

Now, when a new opportunity that requires new software functions is being considered, we merely search the catalogs of Free Software, and choose what best matches our need. When our need is only partially met, we ourselves are enabled to add the parts which we need (we make local modifications regularly).”

Planet Geek provides free used computers to families who would not be able to afford computers. Many of Planet Geek's clients are new Canadians with a first language other than English. Over its existence Planet Geek has given away about 200 computers. Because people can get at the source code, adding languages that are too small or too poor to attract commercial software vendors is not an issue in open source, if you have some technically inclined bilingual volunteers. Jon Alexander at Planet Geek notes “Many of the clients we serve through the food bank and other agencies have another tongue as their first language, so having multilingual support is crucial to our success. A number of recipients have chosen to change the language, and we have included that in our training when requested.” With open source software, Planet Geek can provide some support for everything from English, to Tamil, to Klingon and everything in between. 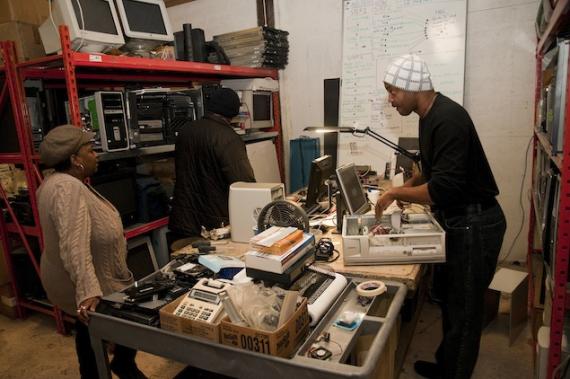 Free Geek Toronto provides computer repair training. Open source software supports their day-to-day operations. Chief Technology Officer Sammy Lao notes “If we had to pay a licensing fee for the OS and office suite for each machine, we simply won't exist. Even the lowest subsidized cost license that Microsoft charges is still too high for us.” Sammy noted that Free Geek Toronto uses SugarCRM for their contact database, LedgerSMB for their financial software and Drupal for the membership. Sammy further noted “For us so far, we have both cheaper TCO (total cost of ownership) and better reliability than closed-source alternatives. We have an easier time finding people with skillsets in these software because we tend to attract many people interested in FOSS (free and open-source software) to participate in our organization at a technical level.”

The examples drawn on above are all being run by people who are very comfortable with technology, and are not typical of the charity landscape. Still, you should look at your operations and ask “Do I really need to buy this software?” For example, you may need a word processing program at a volunteer desk, but does it need to be Microsoft Office? If your people are comfortable with technology you may find that Open Office will do the job and the money saved far better spent on service delivery.

Part 3 of this series looks at using Linux as an operating system.