Note from Tierney: last week I shared this example from Médecins Sans Frontières as a good example of digital storytelling. In this post, James Howe (whose blog was the reason I originally discovered this) goes into more depth on what nonprofits can learn from MSF's example. 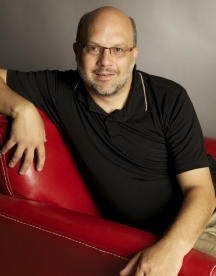 A trauma hospital in war-torn Syria seems an unlikely spot to be posting about your day on Facebook. Yet that’s exactly what Canadian doctor Anne Marie Pegg did for Médecins Sans Frontières (MSF) on International Women’s Day with the help of staff in its Canadian office. I’ve called the MSF effort one of the best examples of social media storytelling.

Most importantly, you can learn from this example to tell your organization’s stories through social media too.

MSF told their story without and special software, fancy equipment or expensive technology. They used Facebook and Twitter to share the story with the work and I expect e-mail to communicate internally. Sure they could have shot a video but they chose to keep it simple. 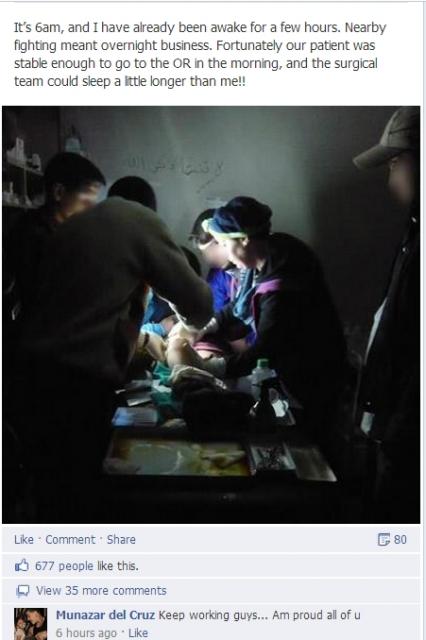 Facebook loves photos and I think this storytelling worked best there as a result. Digital cameras are everywhere now and make it much easier to give a story a visual element.

They chose to tell the story of a day in the life of a frontline physician in a war zone. By doing so, they gave supporters a glimpse into how they deliver their mission—something that I’m sure is difficult. An everyday story shared through social media allowed for real time updates that I’m sure kept their Facebook community coming back for updates.

It’s an example of the natural kind of content surrounds us but that social profits often dismiss. The “day in the life” concept is one that can be applied to share a wide variety of nonprofit stories.

What a great idea for MSF to mark International Women’s day by sharing the work of one of their female doctors. Doing so gave the story an extra dimension that demonstrated the meaning of the day. Pegg helping a woman give birth gave the story even more depth and poignancy.

MSF used an integrated approach to sharing the story. It had a life greater than a tweet or post or even a series of tweets or posts. They used Storify to gather the tweets together so they could share them as a group and embed them on their website.

They integrated more traditional forms of media by sharing news of the storytelling on their website. They also submitted a column by Pegg describing her day to the Toronto Star. Later there was an interview on CBC’s The Current that was turned into a recruitment video.

These additional uses for Pegg’s story then created additional content to be shared on social media.

You can do it too!

Any nonprofit or charity can tell its stories through social media as easily as MSF.

Granted you may not have as dramatic a setting nor gather national media attention, but that’s not necessary - especially to reach the key people you want to engage.

My point is that you have all the tools that need already. And you have stories surrounding you. Each of you also have websites and other traditional forms of media to share your story further. Think for example of how a story like this could help bring an annual report to life—and build your online communities.

Telling stories through social media does take some time to plan and execute, but it's time well spent. For most of us, we need to see this as a small risk or “little bet” that is worth the initiative to pull it off.

Be inspired! Find how you can tell your stories through social media without any additional resources.

James Howe is the Chief Idea Guy! at Communicate & Howe! which is a full service communications firm primarily serving the social profit sector. He previously worked for the Daily Bread Food Bank in Toronto and the YMCAs of Cambridge & Kitchener-Waterloo. He’s been active on LinkedIn since 2005. Follow him on Twitter (@communic8nhowe) or Communicate & Howe! on LinkedIn.