The Decline of Organic Reach: Ideas to Engage your Facebook Audience

One of the main causes is the advancement of smartphones and their camera technology. Where creating content was once labour-intensive (e.g. taking photos with a digital camera, uploading them to your computer, and then posting them), nowadays the whole process can be done on your smartphone anywhere, anytime (assuming you have data).

As a result, more and more content is being produced; Facebook says on average, 1,500 stories can appear in someone’s news feed when they log on, and this increased competition makes it hard for any one story - your story - to gain exposure.

Similarly, Facebook “decided to downplay stories from publishers on users’ news feed, in order to promote more personal stories from their favourite people,” as observed by Search Engine Watch. This means less reach for pages operated by nonprofits and for-profits alike. Facebook has admitted to this trend, and it has also been supported by data.

At the same time we saw this decline, stock prices for Facebook rose by about 35% between October 2013 and February 2014, sparking a debate over whether the decline of organic reach has been manufactured to coerce businesses into using paid advertising to reach their audience.

But we’re not here to talk about why organic reach has declined, but rather what we can do about it.

How Other Nonprofits Have Found Success

First things first: you don’t NEED paid advertising to be successful on Facebook today. Some nonprofits have been able to adapt through clever marketing tactics.

Consider the Centre for Social Innovation for example. They’re a co-working space for social-good organizations and in May of 2014 they came up with the idea to allow one of their member organizations to operate the CSI Facebook page each week, for 10 weeks.

The goal was to bring their members into their social media fold and tap into each of their personal and professional networks. It was a huge success. CSI’s total reach peaked at 98 000, as opposed to a peak of 6 000 previous to the campaign. CSI’s fan base also increased from 9 500 to 12 500, and now sits at 23 400. The campaign was so successful they made it a regular practice. 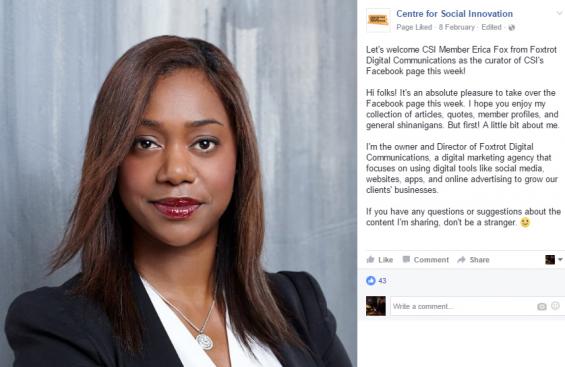 Other nonprofits like The Toronto Humane Society (THS) were able to adapt by exploiting their natural competitive advantage with social media engagement. Their posts frequently feature photos and descriptions of adoptable animals, receiving sometimes hundreds of likes and shares. 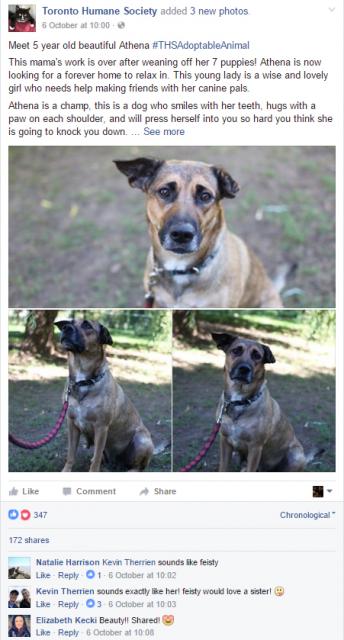 It’s no surprise that photos and videos of rescued animals get a lot of engagement - they pull at the heartstrings of their audience and draw them in. It’s purely emotional content that adds value to people’s lives. It’s also a form of entertainment, as people enjoy seeing cute animals while surfing Facebook. And being one of the leading animal shelters in the biggest city in Canada, THS has almost 50 000 page likes, providing a large, committed audience.

What about organizations that don’t have naturally engaging content or a community network to tap into? We’ve experienced this here at TechSoup Canada; articles about technology don’t tend to catch people’s eyes on Facebook.

To put it in perspective, the post shown earlier from the THS garnered more engagement than all the content we posted from June to September.

We were determined nonetheless to develop a way to increase our engagement and awareness, even if our content shifted from educational to entertaining. But what exactly are facebook users looking for? What kind of content resonates most with them?

According to Facebook VP of advertising technology, Brian Boland, “great content teaches people something, entertains them, makes them think, or in some other way adds value to their lives.”

But it’s not just the goal of the content that makes it effective or not, it’s the tone as well.

“There are plenty of marketing platforms where professional content is the main focus. But on Facebook, you can keep it lighthearted,” Danielle Cormier of Constant Contact wrote. “If you know your audience, you’ll know what they’ll find entertaining and it’s as simple as that!”

We knew our audience was full of what we call “accidental techies” - nonprofit workers with little-to-no technical background, who are learning to use technology to work more effectively. But our relationship with our members is often brief; nonprofits come to TechSoup Canada to order donated and discounted technology, and when they get what they need, we tend to fall off their radar.

It’s a reality we recognize, and so we asked: if people aren’t engaging with our educational tech content, then how can we provide some value in their lives, increase engagement and find success organically with Facebook? We decided to use something that can apply to any industry and any kind of content: humour. 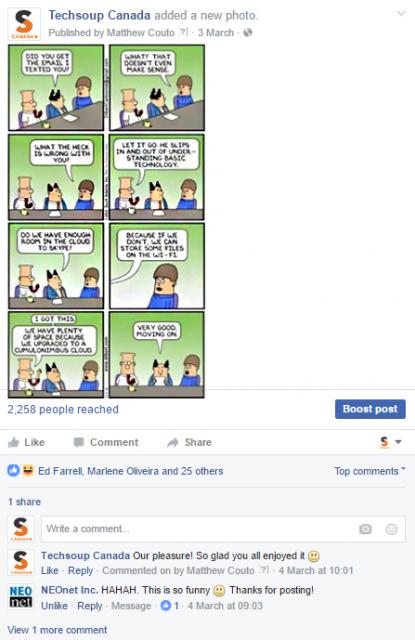 We decided to intersperse tech-related memes, comics and other jokes within our educational content. One day we share tips on choosing a CRM, and the next day we are simply trying to make people laugh. We balance our mission of curating nonprofit tech resources with supplying a little chuckle in someone’s day.

Here’s the interesting thing: we found our engagement in general increased when we started including humourous content! We started including humour in our posts in January 2016, 9 months ago, and since then our average reach for even non-humourous posts was almost twice that of our general reach during the 9 months previous to January 2016 (197 vs 347 reach per post). Keep in mind, this is a one-case study, but the verdict: as we gave our Facebook audience more of what they wanted, they started engaging more with our technology-related content.

In the end, you can experiment with the kind of content that works for you. Each nonprofit will find success with different approaches, and only you know what your audience will respond to. In general however, Kissmetrics identified some archetypes of posts that tend to do well.

We hope we’ve helped spur some ideas to how your nonprofit can improve your organic reach on Facebook.

re: FB decline of organic reach

It is an interesting and useful article to help solve a problem we all recognise however the solution really depends on the resources available in your organization.

We at LOUD have no staff, only volunteers. Asking volunteers to invest extra time on experimenting with engaging FB posts with no certain outcome is a lottery. FB "boosting" and particularly local advertising can be very effective and needn't cost very much money if done properly. We need to get away from the idea that Facebook is a free resource. It is a business and sometimes we have to pay to reach our target audiences. Often our investment is as little as $3 or $5 and we reach and engage many more people than we could ever hope to organically. (ie for free). We wouldn't expect to send old-fashioned direct mail for free. Why should it be different to communicate via Facebook?

RE: re: FB decline of organic reach

You're absolutely right, it does depend on your resources, and as I pointed out, the advantages your organization has. We were only able to experiment because I handle social media as an employee.

And I agree with all the points you made! I think people 'expect' it to be free, because that's what they were used to once upon a time - i.e. they were able to be successful at no cost. But as we're seeing, Facebook is putting the pressure on to increase advertising revenue. It's indeed a business, and charging for exposure is totally normal. I think this is another instance of a trend within so many online industries (music, film, news etc.) where it was once free, but now businesses are figuring out ways to charge people.

However, while you are right that a few dollars here and there for important posts isn't that expensive, it CAN get expensive if you're posting every day. So for less targeted posts that are really just there as part of your online presence, paid advertising isn't a great option and there's still a need for organic reach strategy.

Thanks for replying! That was a very thoughtful comment.