Are you the most tech savvy person at your nonprofit? Do you suddenly find yourself in charge of tech projects, like managing your nonprofit’s website, social media, CRM and emails? Are you often overwhelmed because you don’t have an IT background? Don’t worry, you’re not alone.

Charity Gaspar, Community Living North Halton (CLNH) and Tierney Smith, from TechSoup Canada provided tips and valuable insights to help you learn how to successfully manage your nonprofit’s IT projects-- all without a background in tech.

This blog post summarizes the key takeaways from the event. You can also watch the event recording on TechSoup Canada’s YouTube channel and view Tierney and Charity’s slides on SlideShare.

Technically, Charity Gasper’s title is Executive Assistant but IT and Communications fall on her plate at CLNH as well, making her an accidental techie. She assists her team with anything from setting up new mobile phones to the very basics, such as learning to use bold font. Working with about 50 staff computers and 25 mobiles, her role involves spending a fair amount of time responding to reactionary technology needs and “putting out fires.” At the May 2014 Toronto Net Tuesday, Charity presented on her project of transferring a staff of 50 who were not especially tech savvy from Outlook to Google hosted email.

Why did the CLNH switch to google hosted email?

After one too many encounters with a “blue screen of death” caused by an old server, IT changes were needed at her organization. She tried not to be biased when convincing the management team that moving to Google hosted email was a good option, and the final decision was made based on which was the least expensive option at the time.

What made the migration successful?

1. Having a clear timeline and communication at every point: 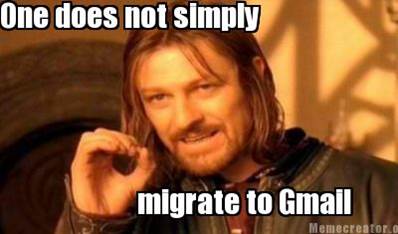 2. A combination of workshops and one-on-one support:


3. Adapting to people’s needs and focusing on positivity:


How can an Accidental Techie gain organizational buy-in for IT projects?

Tierney highlighted the stages of planning and implementing an IT project based on examples from the the Maytree Foundation’s CRM implementation and the TechSoup Canada website upgrade.


When beginning an IT project, Tierney discussed the importance of acknowledging that planning and implementation will be about a 50/50 split of any project, and that jumping in without planning will lead to future problems.

For the first phase, Tierney highlighted these 4 phases of planning from Idealware's article, "9 steps of planning a sucessful IT project":

When thinking about requirements of your technology during the planning phase, Tierney emphasized the need to consider what processes you can improve.

For example, the Maytree CRM upgrade involved switching from an Access database that was 10 years old. When they considered improving processes, they considered things like how, historically, they had not tracked past speaking engagements so they didn’t have a reliable way of knowing if a CEO spoke on a certain topic.

Another important reason to plan and understand what processes you’re looking to improve is to avoid being drawn into sales pitches. Without a clear list of requirements, you might receive a demo of the great things but may not be shown things that you’re really looking for.

The second half of a tech project, of course, is the implementation phase. Tierney highlighted these 5 steps from Idealware's planning guide:

From applying these 5 steps to the TechSoup Canada website upgrade, Tierney passed on a few general tips for the implementation phase of IT projects: