What is Open Source? Part 1: Introduction

Editor's note: This is the first of a three-part series introducing open source software. The following blog posts will look at examples of technical nonprofits that use open source, and using Linux as an operating system.

What is Open Source? Also, why should you your not-for-profit or charity be looking at open source source software for part or all of your computing needs?

Open source software is software where you can get full access to the computer instructions that were used to create a program, then modify the program and redistribute the resulting program. Obviously, most people, even those in the information technology industry, don't really plan to re-write their own word processing programs or spreadsheet program, or … but that option is there. This puts you, not a software vendor, in the driver's seat. What it means is that if an open source program that you love doesn't have a feature you really need, then, if you have a programming background, you can add the feature yourself, or if you don't have a programming background you can hire someone with such a background to add the feature. Likewise, while most open source program producers are very good about fixing software problems and maintaining the software, in the cases where they don't, again you have options. What this means is that you, not a software vendor, is in the driver's seat when it comes to your software. You can decide what happens with your software.

This is all good, right? Now for the best bit for not-for-profits and charities is that most open source software is available for free; all you pay for is the internet connection and any blank CDs, DVDs, or USB memory keys that you might use to store the software on. What this also means is that the companies in the open source world (and there are a number, such as Red Hat and Canonical) make their money on support services and custom programming. So, if your organization critical server has a problem at 3 AM, or you need an extra software feature, there are companies that can help for a price. 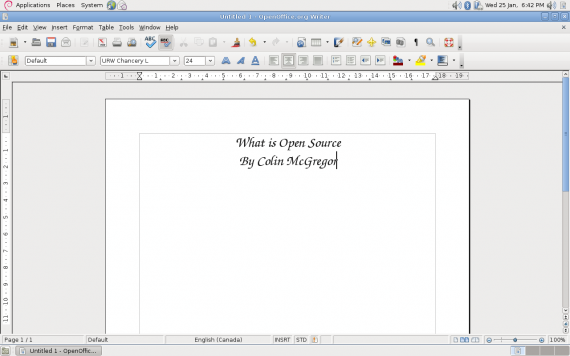 So, what sort of software available in as open source? Well, just about everything: there are word processors, such as OpenOffice, web browsers such as Firefox, accounting programs such as GnuCash and even full replacements for Microsoft Windows such as Linux. All of it free.

The way these programs came to be varies, but usually came out of a person or a company with a particular problem that need to be dealt with and for which there was no commercial option available. An example is Open Office, which was created by Sun Microsystems (now a part of Oracle). They needed an office program that would run on all computers they built, even the ones that didn't run Microsoft Windows. Giving away software helped hardware sales, and accepting changes/updates from the community meant they got better software at no cost. Open Office is still being periodically updated and upgraded by the Apache Software Foundation, after Oracle decided to focus on their core business, commercial database software.

Editor's note: Want to learn more about the pros & cons of using open source at a nonprofit? Read this article from Idealware.