If I could share 1 thing I've learned about using social media for nonprofits...

In the crazy and confusing world that social media can be (especially when you’re just getting started), what should you be keeping in mind? Earlier this week I put out the call on Facebook and Twitter to get advice from some of the people in our community who know best - because they live it every day!

I asked: “If I could share 1 thing I've learned about using social media for nonprofits, it would be: _______”

Here are the many perspectives & suggestions from the community (plain text below): 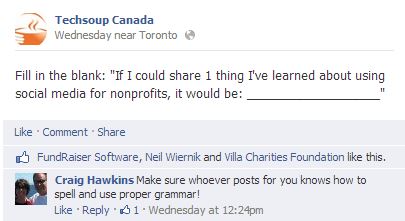 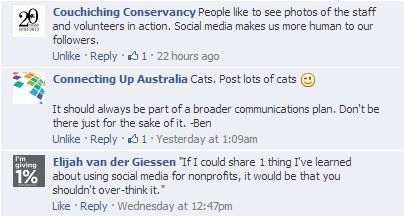 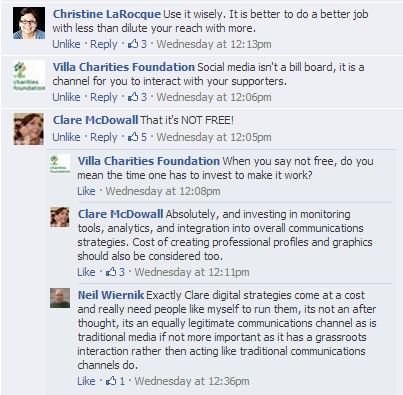 Thanks to everyone for sharing their great advice!

“Share quality, interesting posts because they are the ones that people like to read and engage with” - Heather Card, Canadian Council of Christian Charities

“If I could share 1 thing I've learned about using social media for nonprofits, it would be: to have a conversation” - Heather Jewell, Meal Exchange

“"1 thing I've learned about using social media for nonprofits, is:___" that it's a comradery building -  excercise” - Jennifer Martino, OLPC Canada

“Make sure whoever posts for you knows how to spell and use proper grammar!” - Craig Hawkins

“Use it wisely. It is better to do a better job with less than dilute your reach with more.” - Christine LaRocque, Canadian Paediatric Society

“Social media isn't a bill board, it is a channel for you to interact with your supporters.” - Villa Charities Foundation

“You should be strategic and use posts to meet org objectives...” - Ottawa-Rape-Crisis-Centre

“It is powerful we can reach out so many and mobilize easier” - Ethel Cote, Canadian Centre for Community Renewal

“People like to see photos of the staff and volunteers in action. Social media makes us more human to our followers.” - Couchiching Conservancy

“Cats. Post lots of cats.
It should always be part of a broader communications plan. Don't be there just for the sake of it.” - Ben, ConnectingUp Australia

"If I could share 1 thing I've learned about using social media for nonprofits, it would be that you shouldn't over-think it." - Elijah van der Giessen, NetSquared

“That it's NOT FREE!” - Clare McDowall, Socially Good

Some further discussion on this one:

“When you say not free, do you mean the time one has to invest to make it work?” - Villa Charities Foundation

“Absolutely, and investing in monitoring tools, analytics, and integration into overall communications strategies. Cost of creating professional profiles and graphics should also be considered too.” - Clare McDowall