New to TechSoup Battles? Find out what it’s all about and check out our previous challenges.

Many nonprofits are considering working in the cloud due to its low-cost benefits and Microsoft is well aware of this trend. They recently opened their popular cloud solution, Office 365 for Nonprofits, to the list of cloud computing options for the Canadian nonprofit sector.

Now before I get into the details, it’s important to understand that there are two Office 365 offerings for nonprofits: donated plans and discounted plans. If you want to see a comparison between the two plans, you can read our article Are You Ready for Microsoft Office 365 for Nonprofits?

However to make it simple for this review, I'm focusing on the donated E1 plan because, let’s face it, nonprofits love good tech solutions that are free*.

In this blog post, we'll briefly look at what Office 365 is and why it should be considered, and then dive into the functionality of Microsoft Office's Web Apps and other Office 365 programs.

*Many organizations are eligible for Office 365 for Nonprofits, but some aren’t. You can find out if you’re eligible by reviewing Microsoft’s Eligibility Requirements. If you’re currently on E3’s trial period and qualify for Office 365’s E1 plan, we have another post that shows you how to switch.

Office 365 and Why You Should Consider it

Microsoft boasts Office 365 as an all-in-one solution, and quite frankly it is for day-to-day office operations. It takes the familiar and popular Office Suite (Outlook, Word, Excel, PowerPoint, OneNote) and makes it accessible anywhere, anytime and on any platform (PC, Mac, smartphones and tablets). Microsoft also throws in other programs such as Sharepoint and Lync in the Office 365 bundle, making it a well-rounded back office solution.

What you need for Office 365

To access Office 365, you’ll need to sign-up for a free trial of the Office 365 E3 plan (if you’re eligible for the E1 plan, you can switch it to after creating your account) and create a Windows Live ID.

I should note that Office 365 comes with a domain name - yourname.onmicrosoft.com - but if you have an existing domain, you can add it to your Office 365 account and use it.

Having Outlook hosted on the cloud rather than hosted on a server is an improvement for three big reasons:

What I like about Lync is its collaborative capabilities. People who are in a conference call can open and work on the same document together: 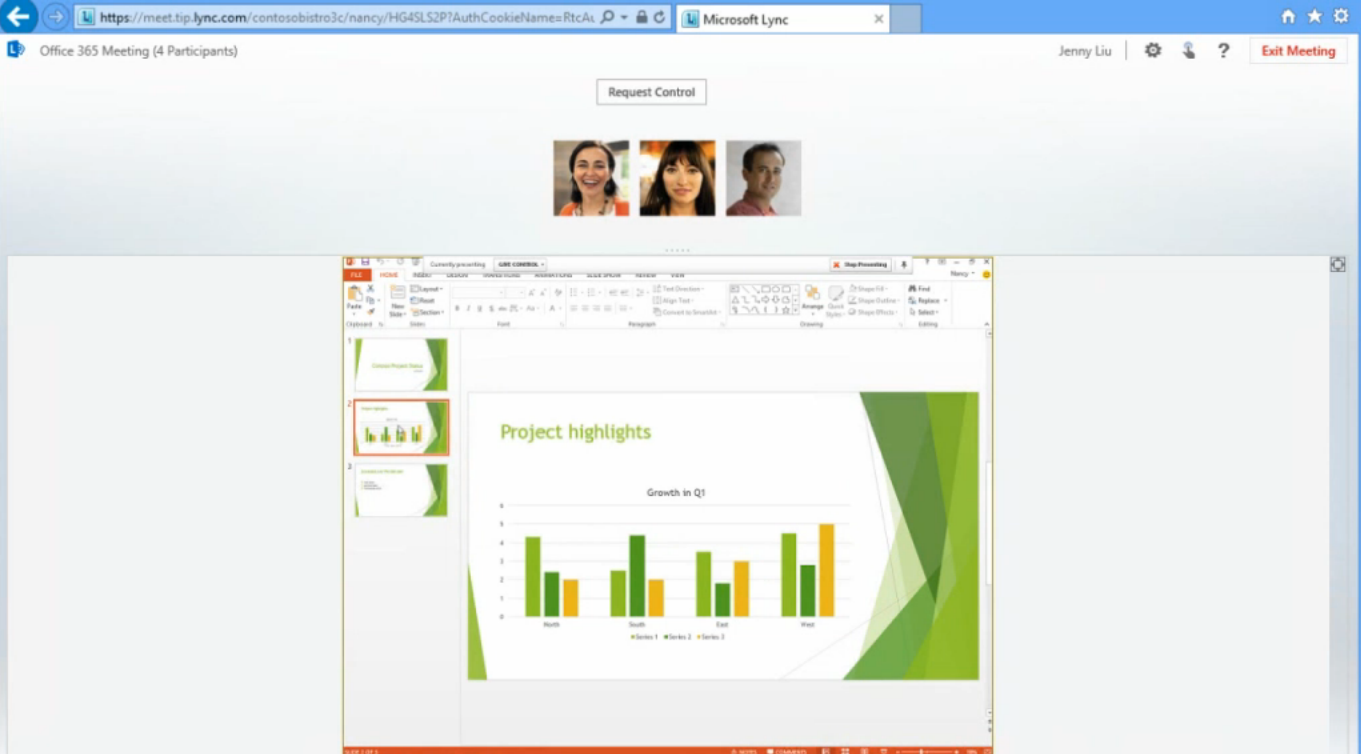 Office suite at the tip of your fingers

You automatically have access to Word, Excel, Excel Survey, PowerPoint and OneNote web apps on any Office 365 plan. Office Suite web apps are pretty much the same as the desktop application versions, except they have fewer options and functionality:

Although the web apps aren’t as robust as their desktop counterparts, they have all the main features needed to complete common office tasks, plus they allow for real-time collaborative editing (ie. you can see the other person’s edits as they are typing). For example, if you have two users editing the same document in the Word web app, it’ll look something like this:

For those that aren’t completely sold on web apps or need the full functionality of Office’s desktop applications, you have the choice to open documents on the desktop.

Now this is where Office 365 E1 and E3 plans differ. On E3, you have both the web apps and desktop applications so you can easily switch between the two versions. On E1, however, you only have access to web apps. If you’re on E1 and would like the option of switching to Office Suite’s desktop versions, you can:

OneDrive Pro - Saving Your Files on the Cloud

Jane reviewed OneDrive (previously SkyDrive) for the third TechSoup Battle challenge, Document Collaboration, so I won’t go into too much detail in this post.

The functionalities of OneDrive and OneDrive Pro are the same with the only difference being permission control. OneDrive is an online storage intended for personal use, so you are free to decide which documents to share or not share. OneDrive Pro, on the other hand, is intended for organizations to share and collaborate on work documents with colleagues, so your organization’s site administrator would be the one controlling what each user can do in the OneDrive Pro library.

Where OneDrive is used for storing your organization’s documents, team sites are used to share knowledge with your colleagues such as internal wiki pages, manuals, media kits, etc 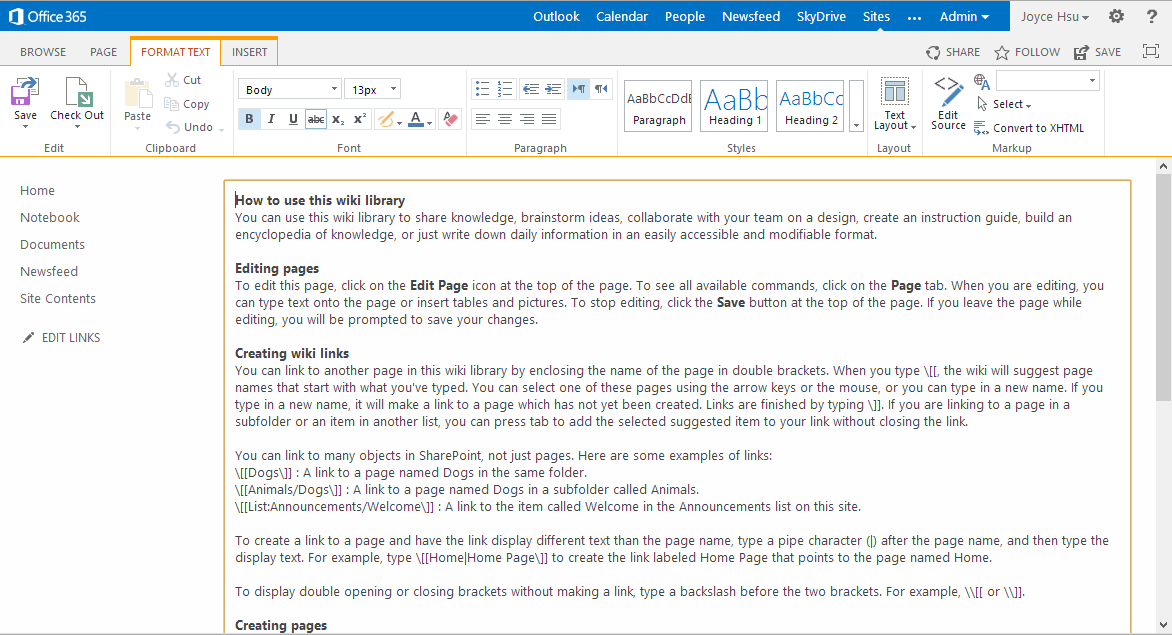 Public websites are for your supporters who want to learn more about your organization: 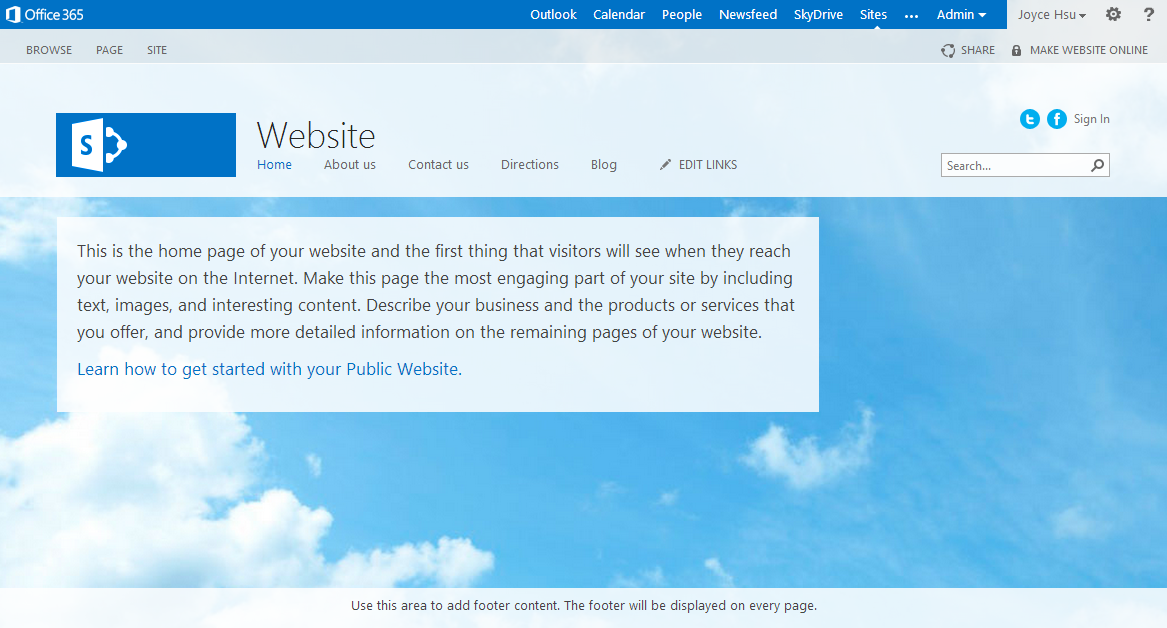 SharePoint makes it easy for non-techie users to set up a team or public site since the interface resembles Microsoft Word (no joke). 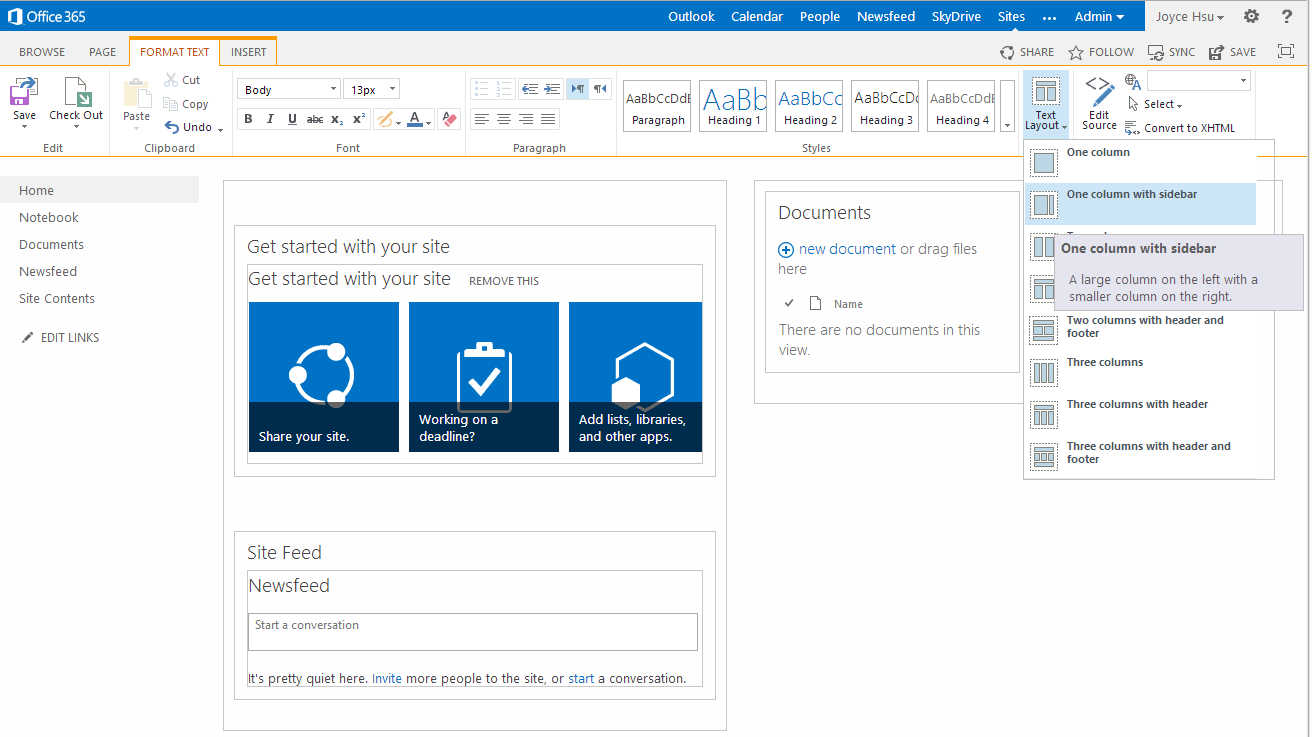 For those that prefer to work in code, you can click on “Edit Source” to switch to HTML.

I would recommend nonprofits to consider Office 365 if they want to move to the cloud, especially if the nonprofit is already used to working in Microsoft Office (Word, Excel, PowerPoint, OneNote).  There are many worthy competitors that offer similiar functionalities, like Google Apps, but the main selling points are that Office 365 is free (if you are eligible) and familiar. The majority of nonprofit staff aren’t tech savvy, so it is generally a lot easier to transition them to the cloud when they’re on a familiar platform.

To further emphasize this point, you can read about Brampton Caledon Community Living’s experience with Office 365. Overall their transition was fairly painless because so many of their staff were already familiar with Microsoft Office, and Office 365 is pretty much Microsoft Office Online packaged with Lync and Sharepoint.

What do you think? Have you tried Office 365 for Nonprofits? Share your thoughts on Twitter (#TechSoupBattles), Facebook, below in the comments or send us an email.

Par youthimpact, le mer, 2014-04-23 12:48.
Hi, I'm considering going to 365 - we are a very small charity, only two staff. I work with a laptop and a regular computer and am upgrading to a newer computer with Windows 8 but no Office Suite on it. I have 2010(purchased through Techsoup) on the laptop. The other staff member uses her own personal laptop and she has 365 at her home. I'll let you know how we make out with it.